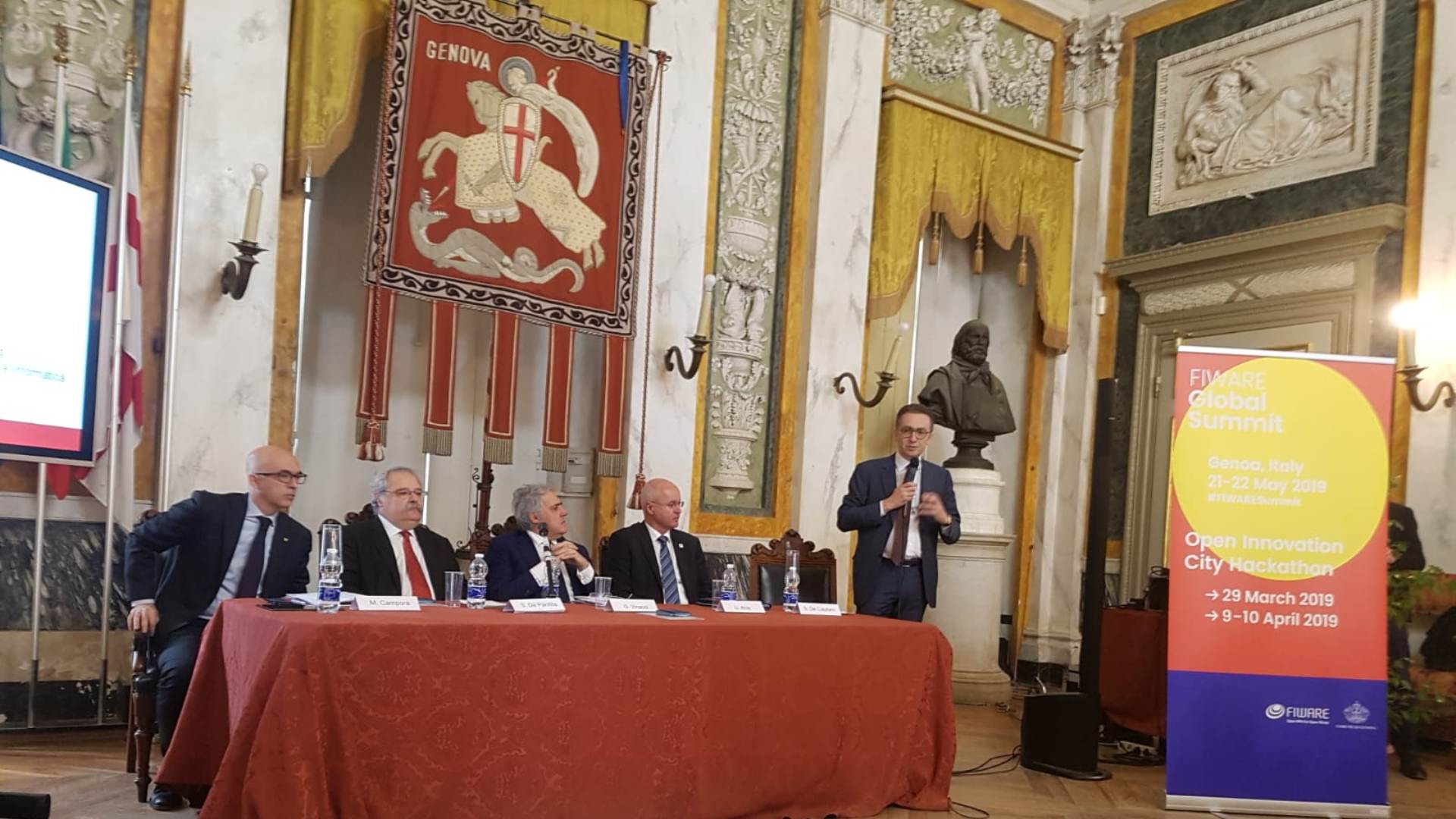 FIWARE Foundation, Engineering and the Municipality of Genoa together for the Global FIWARE Summit 2019 which will be held from May 21 to 22 at Porto Antico, in the spectacular "square" on the Mediterranean in the historic heart of Genoa.

In the era of technological evolution fueled by the creation of ecosystems populated by different subjects that can give rise to cultural, skills and business contaminations, the importance of the appointment is twofold. In line with the FIWARE Foundation's mission, the event aims to increase the value of the technological ecosystem but also its economic impact, both for the realities that are part of it and for the territories on which it is present.

FIWARE is the independent open source platform which has its origins in a major European public-private collaboration program worth over 500 million in investments. FIWARE has grown to become today an open and standard platform on a global level for the development of digital applications on which to base new business and services management models in both the private and public sector.
The "open" and royalty-free approach differentiates FIWARE from other market platforms controlled by American or Asian big tech companies.
Hundreds of applications for cities (parking, air quality, bike sharing), for industry 4.0, for energy and for precision agriculture are now in production all over the world thanks to FIWARE. FIWARE technologies have been formally adopted by the European Commission as one of the constituent elements for the development of digitization policy.
FIWARE has over 200 members worldwide, working together to develop and define standards on which industries and public or private organizations can build and share interoperable and easily exportable "smart" solutions at international level.
The work carried out by the FIWARE ecosystem covers all the major issues crucial for supporting and designing the strategic evolution of companies and public administration: from Big Data to the Internet of Things, including Cloud, Security and Artificial Intelligence, which will be the subject of discussion and analysis during the Global FIWARE Summit.

The aim of the Summit is to consolidate and further expand the community, involving new players, such as developers or public and private companies in the ICT sector, research centers, but also end users, while giving young students the opportunity to look to their future.

Some thousand technicians, developers, entrepreneurs, universities, startups and large corporations from the IT world are expected in Genoa for two days that promise to be full of content and scientific and business opportunities.

During the Summit, Engineering will also bring its experience and vision of the Augmented City.

The principles of FIWARE (open source, open standard and royalty-free) have been adopted by over 120 cities participating in the Open Agile Smart City network, of which Genoa is a reference municipality for smart applications and plays an active role in several international research and innovation projects, with important repercussions for the daily life of the city.
The mayor of Genoa, Marco Bucci, commented: “Technology is part of the identity of our city through its industrial and cultural history, and has led us to promote the candidacy of Genoa for hosting this important world event. We are proud of the important role we are playing within the FIWARE ecosystem and, in line with our vocation as a hub for national and international communications, we are particularly happy to host an event designed to promote opportunities for meetings, exchange and knowledge among the professionals, entrepreneurs and developers who will be driving the event. We are also happy to support this initiative promoted by the FIWARE Foundation and by an important international player very close to our city like Engineering“.

The Genoese ecosystem of FIWARE is already very active and has the Municipality of Genoa and the university in the frontline; they are contributing to the promotion, improvement, protection and validation of FIWARE technologies and community activities, as well as several young entrepreneurial initiatives which, by becoming part of FIWARE acceleration programs, benefit from concrete growth opportunities.

Ulrich Ahle, CEO of the FIWARE Foundation, added: "The Global FIWARE Summit is continually growing by attracting IT technicians, entrepreneurs and end users from the six continents. Genoa has been an active member of our Community ever since the first Global City Team Challenge initiative with NIST in the USA. I believe that the Genoa Summit will be an opportunity for significant growth of the FIWARE community, which we hope can also involve new players from the Genoese high tech ecosystem."

Paolo Pandozy, CEO of Engineering, stressed: "Engineering has gone through many technological revolutions but, among those that have most defined our identity and the value of our offer, is the open source revolution, which is not just about a type of software but also a mental and cultural approach. As founding members of the FIWARE Foundation, we promoted the idea of organizing a Global FIWARE Summit in Italy - and in Genoa in particular - because here, also due to the long collaboration that links us to the city, we know that the Summit can find the right cultural context". In line with the values of openness and collaboration underlying the initiative, I therefore hope that the Global Fiware Summit will find the support of the many important players in the industrial and IT world operating in this area, focusing together on making this a recurring appointment."

We redesign the way to manage, live and think about art, the promotion of local territories and all that relates to the two engines of Italian economy: culture and tourism.