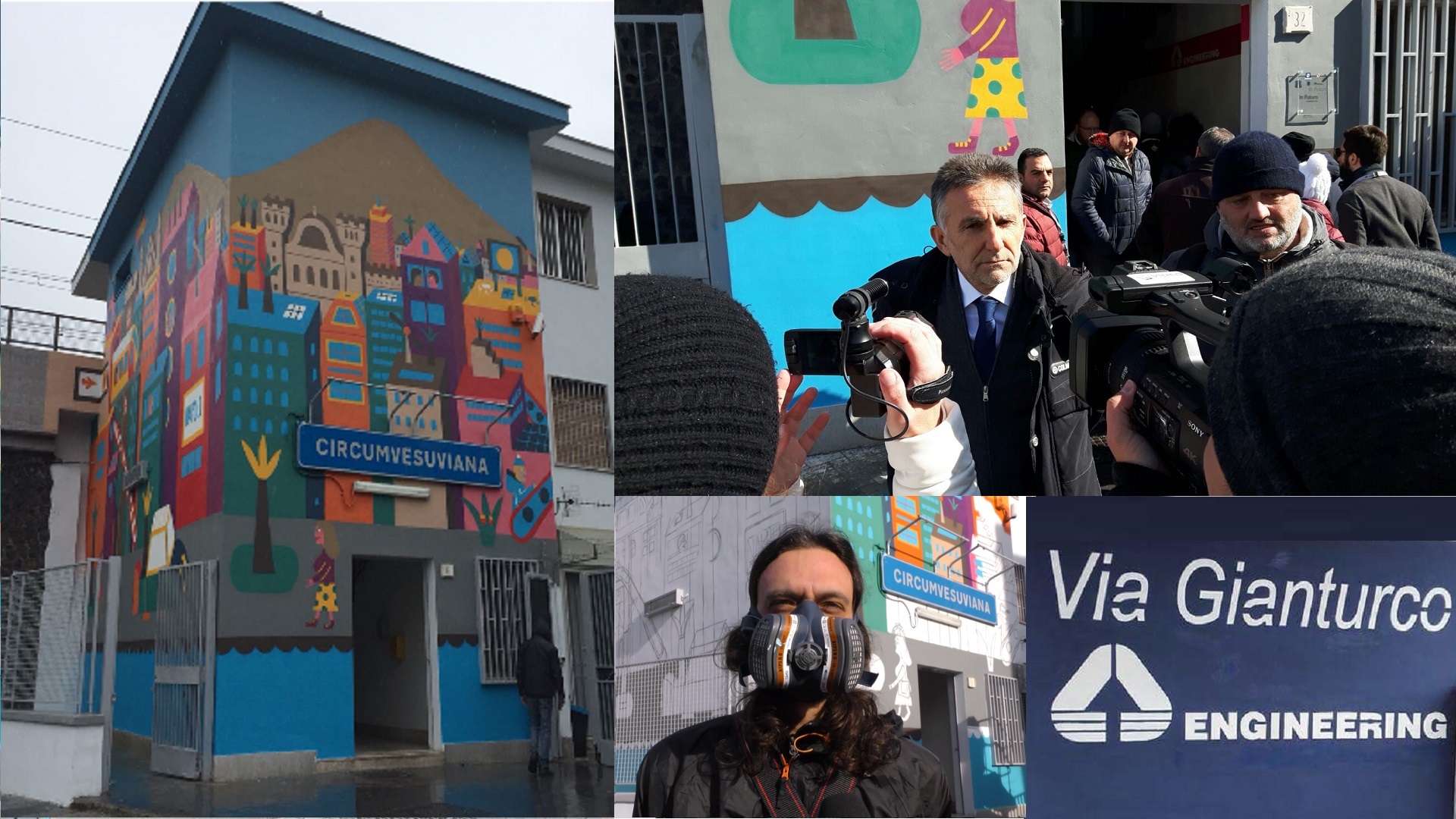 The redevelopment intervention and murals work have been realized thanks to Engineering in agreement with EAV.

Via Gianturco – Engineering station of the Circumvesuviana in Naples was presented today, completely renovated thanks to an important redevelopment project, and given back to the territory and users.

Thanks to Engineering, which financed and developed the initiative of the Ente Autonomo Volturno (EAV), it was possible to carry out the extraordinary internal maintenance work of the structure. Today, the Via Gianturco – Engineering station also has a completely new appearance featuring the urban art work titled “IN FUTURO”, realized by artist Geometric Bang, creator of many appreciated murals in Italy and abroad, selected by the multinational in collaboration with INWARD Observatory on Urban Creativity.

Engineering is the Italian leader in Digital Transformation. Founded in Italy almost 40 years ago and today active internationally, the company and its subsidiaries are engaged daily in defining the processes and digitization solutions necessary to lead companies and public administration towards the future, with the ambitious objectives of simplifying access and use of both private and public services, and to return to the public one of the most precious resources: time

Michele Cinaglia, President of Engineering, stressed: “We wanted to participate alongside EAV in this intervention of redeveloping the Via Gianturco station because we believe the project is consistent with the attention that Engineering places on the territories in which it operates and its people, which are over 520 in Naples and, what's more, constantly growing. The choice to complete redevelopment of the station with an urban art intervention that narrates a Naples smart city also reflects the strong sensitivity of our Group towards art and culture, which we believe to be fundamental in designing the future”.

The “IN FUTURO” murals remind all Engineering employees who pass through the station every day, the Group's numerous partners and all the city's station users that Naples is a place that combines natural and cultural beauties of the past, keeping their memory alive, but at the same time knows how to evolve and progress by looking at new technologies.

In the work, Naples is designed as a pop-up, with an original overlapping of animated and inanimate natural and cultural elements. The sea and Vesuvius, the Duomo and the Maschio Angioino live together, as well as urban escalators, micro condominium wind turbines, magnetic levitation cars, an elevated train and a building that opens to the world from the transparency of a smartphone-like glass window. The artist thus imagines an increasingly sustainable city from the point of view of mobility and livability thanks to public infrastructures and green spaces that can be enjoyed by everyone.

Engineering, which allocated around € 100,000 for the operation, has also pledged to support the annual maintenance costs for the next three years.

For EAV it is the twelfth station redeveloped in the last two years. The next will be Portici, Agnano and Grotta del Sole.

Born in Lodi, in 1998 he began to frequent the world of graffiti, thanks to many important wall writers who live in his city. Initially, as is usually the case, he studied letters but after a while he started to devote himself to characters, with which he developed his attention to faces, hands, animals and then began to devote much attention to the importance of color. In 2006 he attended a school of graphics and illustration, which led him even more to develop a strong two-dimensionality in design, which mixes with the characters, animals, plants and objects that end up defining the artist's imaginary. He developed his own path in different fields: muralism, graphics, illustration, photography and music and, from 2006 to today, he has participated in various exhibitions in Italy, France, Germany, Spain, Russia, China, America and South Africa. He then worked for clients such as Campari, Fabriano, /LAM, Pigmenti, Art Kitchen, Island Fold, Grauen Studio Gallery, Home Page Festival, Klebstoff Magazine and Picame Magazine.

Maximo Ibarra, CEO at Engineering, among the protagonists on stage with a special live hosted by Riccardo Luna on Sept. 24 at 2pm

Note to Customers in relation to some Cybersecurity issues

In relation to some facts highlighted in the press in the last few hours, we wish to provide the following communication to clarify our role and position.